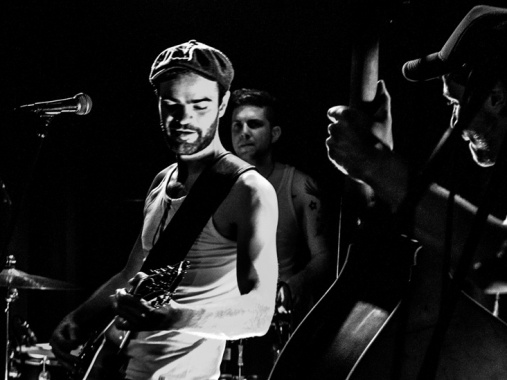 The Baseball Bat Boogie Bastards were founded by the Bogo-Family in 2009. From the beginning the Bastards had a wide range of influences in their music. Rock n’ Roll- Guitar player Ädu Bogo, Metal-Bass player Ritchu Bogo and Jazz-Drummer Mitchu Bogo mixed 50ies Rockabilly / Country, 60ies Garage-Trash and 70ies Punk to a wild rocking sound. Since 2011 the Bastards became more and more an old-school Psychobilly Band. The rhythms got faster and the bass lines crazier. The songwriting is now made by the entire band itself and cover songs are played less and less. With a clear guitar, a small Stand-up-Drumset and a slapping Bass, the Bastards always keep the songs simple but their influences are still hearable. To this day it’s difficult to categorize them in a genre, which is exactly what they want: Being independent of all things, which may restrict them in their musical uniqueness.